Are GMOs a Spud’s Best Bud? 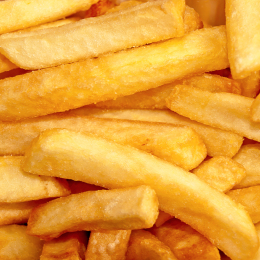 Lots of people are scared of GMOs—even if, as a hilarious video from Jimmy Kimmel shows, they don’t know what they are. As we’ve blogged here again and again, there’s no basis to that fear—all the most prestigious scientific bodies around the globe say that GMOs are safe. Lots of people are also scared about chemicals in their foods giving them cancer, even when that risk is extremely low. A new crop approved today by the USDA throws those two fears into conflict.

Acrylamide is a chemical that can be produced when foods like potatoes are cooked at very high heat, greater than 248 degrees Fahrenheit. There have been a handful of studies of acrylamide in rodents that have indicated exposure could increase the risk for certain types of cancer, but there’s been no conclusive evidence from human studies. Even if that the data from an EPA study of lab rats translated to an increased risk of cancer in humans, you’d have to consume a lot of French fries—think 182 pounds worth (a day?)—to consume the same amount of acrylamide given to the rats in the study. Of course, this low risk hasn’t stopped California from requiring a warning label on foods or products containing acrylamide under the state’s Proposition 65 law.But since acrylamide is created naturally during the cooking process, if you want to avoid it you’ll have to cut out items such as bread, pizza crust, tortillas, cheerios, pretzels, peanut butter, cocoa powder, coffee, and more.

Of course, there’s no need to fear GMOs or low levels of acrylamide.  For most people, this news from the USDA is a reason to celebrate—maybe reduced browning and black spots will save some of the up to one million potatoes we throw away each year from being tossed.