Can Pregnant Women Safely Use DEET to Ward off Zika Threat? 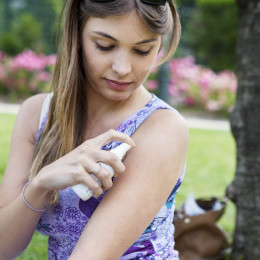 The Zika virus has many women in the United States who are pregnant, or hope to become pregnant, worried. In recent weeks, more scientific evidence has linked Zika to the uptick in the birth defect microcephaly in South American countries. The U.S. Centers for Disease Control and Prevention warns  the Aedes aegypti mosquito, which carries the virus, has a range covering most of the southern U.S., parts of the Midwest, and coastal areas stretching as far north as Connecticut.

First it’s important to note: The threat of Zika in the U.S. isn’t especially great—even in regions where the mosquito travels. We have air conditioning and screens that limit our exposure to mosquitoes, making it harder for mosquitoes to bite a Zika-infected person and spread the disease to another human. Though the mosquito travels a wide range in the U.S., that doesn’t mean the disease itself will spread widely.

Though the risk of contracting the Zika virus is low, women who spend time outside can use insect repellent to protect themselves from mosquito bites. Scientists say mosquito repellents containing DEET are safe for pregnant women—especially when weighed against the risk of Zika and other mosquito-carried illnesses like yellow fever—as long as the repellent isn’t over applied.

Though there hasn’t been a huge volume of research on DEET exposure and pregnancy, a randomized trial of about 900 women in Thailand provides evidence that using DEET on a daily basis for months at a time probably has no effect on a fetus. The U.S. Environmental Protection Agency completed a 2014 safety review of DEET, saying it did not identify “any risks of concern to human health.”

Though only a small amount of insect repellent sprayed by a pregnant woman will make it to the fetus, women worried about exposure to DEET should choose repellents with lower concentrations of DEET and re-apply the spray more often. A 6 percent DEET product should be reapplied every two hours.

DEET offers the best protection from mosquitoes with little to no risk to human health. Many non-DEET sprays don’t do anything to repel mosquitoes, though more studies have shown picaridin-containing bug repellents can be as effective as DEET.  But if you’re set on avoiding DEET, one study suggests applying copious amounts of Victoria’s Secret “Bombshell” perfume repelled insects almost as well as DEET sprays. However, spraying enough perfume to ward of bugs will probably also repel most people. We recommend you stick to DEET sprays.