Does Eating Bacon Really Cause Cancer? 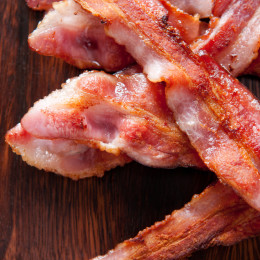 Bacon lovers in California can breathe a sigh of relief—for now, at least. The state Office of Environmental Health Hazard Assessment, which manages Proposition 65 warning labels, has announced it will not require warnings on bacon or other processed meats following news last fall that  the World Health Organization’s International Agency for Research on Cancer had classified these meats as carcinogenic.

When the IARC’s proclamation emerged, we were skeptical of the science behind it. And Prop 65—which has resulted in warning labels on everything from fishing rods to parking garages—certainly has its own multitude of flaws. Now, Reuters has investigated IARC’s methodology and raises serious concerns about its utility for both scientists and the public:

The public sometimes misunderstands what IARC means by its classifications. The agency says it assesses “hazard” – the strength of evidence about whether a substance or activity can cause cancer in any way. It takes no account of typical levels of human exposure or consumption. So it is not measuring “risk” or the likelihood of a person getting cancer from something.

IARC gives no view on the relative levels of risk of getting cancer from, say, plutonium or alcohol; what it does say is that there is clear evidence that both are capable of causing cancer. Therefore it ranks both substances in its top category of being carcinogenic.

The dose makes the poison—as we’ve pointed out with BPA, acrylamide, caramel coloring, and other chemicals. If someone would have to consume, say, 100 pounds of salami and hot dogs a day to be at a serious risk of getting cancer, that’s important context for anyone who hears startling announcements. Unsurprisingly, this opens up the IARC to criticism:

[I]ts methods are poorly understood and do not serve the public well, according to Bob Tarone, a statistician formerly at America’s National Cancer Institute and now Biostatistics Director at the International Epidemiology Institute. He said of the way IARC works: “It’s not good for science, it’s not good for regulatory agencies. And for people? Well, they are just being confused.” […]

Some institutions have also clashed with IARC. The agency is currently embroiled in an acrimonious dispute with the European Food Safety Authority (EFSA) over glyphosate, an ingredient of widely-used pesticides. IARC says glyphosate is “probably carcinogenic.” EFSA says it isn’t. The glyphosate row has thrown up concerns about potential conflicts of interest at IARC: It involves an adviser to the agency who is closely linked to the Environmental Defense Fund, a U.S. campaign group opposed to pesticides.

The full piece from Reuters is worth reading. As for glyphosate and IARC, it’s another good example of the agency’s shortcomings.

A spokesman for OEHHA says that the agency is reviewing the WHO’s classification, and that there’s no timeline for any action, such as listing processed meat under Prop 65. Given how the agency has overzealously administered Prop 65, it may be simply a matter of time.