Home  ⁄  Periodic Fables  ⁄  Activist Groups  ⁄  Leftovers Are Great, But What About Those…

Leftovers Are Great, But What About Those Plastic Containers? 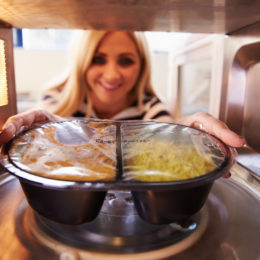 As parents resume the early morning rush of sending their kids back to school, leftovers and make-ahead meals are often the easiest way to ensure everyone is getting the nutrition they need. But while busy families try to make better health decisions, some activists are blaming an unlikely aggressor for America’s expanding waistline: plastics.

In 2008, Good Housekeeping magazine put these claims to the test. It found that of 31 plastic bowls, bags, wraps and containers actually on the market, none leeched chemicals into food while being microwaved.

It makes sense when you consider the safety hoops that plastic containers must jump through before making their way to your kitchen. The FDA requires manufacturers to conduct an extensive safety review of every substance intended to come into contact with food.

More often than not, when researchers talk about certain chemicals being tied to biological processes, they’re referring to rodent studies. It should go without saying that while these investigations inform toxicologists about which substances warrant a second look, rodents are not humans, and their metabolism shouldn’t be assumed to function in the same way. Mice, for example, don’t get addicted to nicotine. Any physician could tell you the same does not hold for people.

It’s certainly true that individual ingredients can be harmful in high enough concentrations, but the same can be said of any substance, like water or caffeine. Sipping on four dozen macchiatos can be fatal, but interspersing your day with a few cups won’t do any harm.

Polystyrene take-away containers (popularly, but incorrectly, known as styrofoam) have similarly been railed against for being made of an ingredient called styrene. At great enough exposure levels, styrene has been associated with cancer. However, polystyrene containers aren’t, and the chemistry of table salt can tell us why.

NaCl, the chemical name for table salt, is made of sodium (Na) and chlorine (Cl). Chlorine by itself is a yellow, poisonous gas. But as any French fry lover knows, salt is perfectly safe to eat. It’s because whether we’re talking about polystyrene or table salt, the old observation by Aristotle still holds: the whole is greater than the sum of its parts.

So when anti-chemical activists try to scare consumers with the idea of yoga mat chemicals in your sandwich or health-hurting particles in your food, neither claim passes the sniff test.

In reality, plastics are made from a safe combination of chemicals – just like glass, ceramics, and stainless steel. Chemicals build our world, and if parents are concerned about keeping their family healthy, it’s far more prudent to pay attention to the food inside the plastic containers than the containers themselves.