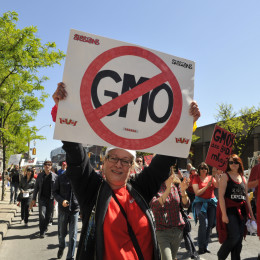 Today, the Dayton Daily News ran an opinion piece from Dr. Joseph Perrone, the Chief Science Office at the Center for Accountability in Science, that explains why fringe activists shouldn’t dictate science policy.

These activists are waging an outrageous war of misinformation. For instance, activist blogger Vani Hari, better known as the “Food Babe,” falsely claims that genetically modified organisms (GMOs) have been linked to everything from autism to allergies, despite the fact that GMOs are widely considered safe by experts such as the World Health Organization, National Academies of Science, and the U.S. Food and Drug Administration (FDA).

The scariest part? These activists’ tactics are working. A recent Pew survey found that a mere 37 percent of Americans believe that GMOs are “safe to eat.” Moreover, these misinformation campaigns have led voters to support anti-GMO ballot measures and push lawmakers to pass policies requiring GMO labeling, which serves no purpose other than to make it hard for food manufacturers to sell the same foods in states with different labeling laws.

We’ve also seen the effects of fear-based, rather than science-based, policymaking when it comes to chemical safety — and it’s not pretty.

Back in 1976, Congress passed the Toxic Substances Control Act (TSCA), giving the U.S. Environmental Protection Agency (EPA) the authority to ensure that the chemicals used in commerce were safe. Unfortunately, the law hasn’t been updated since its passage, and it’s nearly impossible for the EPA to meet the law’s high standards for showing a chemical is dangerous enough to remove it from the market.

You can read the full piece from the Dayton Daily News here: http://www.daytondailynews.com/news/news/opinion/activists-shouldnt-dictate-science-policy/nkwbX/