Here’s the Scoop on Glyphosate in Your Ben & Jerry’s 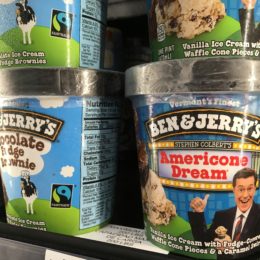 The New York Times is making a name for itself in the realm of sensationalism lately.

First came the heavily criticized article accused America’s favorite macaroni and cheese of being laden with “potentially harmful chemicals.” Now, the Times is taking on Ben & Jerry’s Ice Cream over a sensationalized report claiming 10 of 11 of the company’s flavors contain traces of a common weed killer.

The report was commissioned by the Organic Consumers Association, which bills itself as an advocate of “health, justice, and sustainability.”

But let’s be clear: the Organic Consumers Association isn’t concerned about the dangers lurking in your dessert.

If it was, the group would have noted that the Environmental Protection Agency (EPA) believes that humans can consume roughly 220 micrograms of glyphosate per pound of body weight every day without ever experiencing negative health effects.

According to Dr. John Fagan, the chief executive of the independent laboratory that tested glyphosate at the association’s request, a 75-pound child would need to consume 145,000 eight-ounce servings of Ben & Jerry’s Chocolate Fudge Brownie ice cream (the flavor found to contain the most glyphosate) every day to hit the EPA’s safety limit. For adults, the number of servings jumps to 290,000.

Which goes to show that just because something is “detected,” doesn’t mean it’s dangerous.

Now, don’t get us wrong, a diet composed entirely of ice cream sounds like the ultimate fantasy. But even ignoring the fact that the human stomach can only hold about 16 servings of Chocolate Fudge Brownie at a time, someone who subsisted on an ice cream-only diet would perish from scurvy (vitamin C deficiency) long before residual glyphosate ever caused a health concern.

But why would Organic Consumers Association bother raising the alarm when there’s no fire?

For an organization self-admittedly funded by “several thousand businesses in the natural foods and organic marketplace,” forcing a $132 million brand to go organic offers a pretty strong financial incentive. And we don’t use the word “forcing” flippantly. The group recently blogged about “Why Consumers Need to Force Ben and Jerry’s to Go Organic.”

But for consumers who already pay almost twice as much per serving for a pint of Ben & Jerry’s vanilla compared to the average retail price of ice cream, the added cost and negligible health benefit might be enough to convince them to get their frozen fix from Breyers.

The New York Time’s latest slogan may be “the truth is more important now than ever,” but as far as nutrition science goes, clickbait headlines still reign supreme.