What’s the Worst that Could Happen If We Ditch Vaccines? 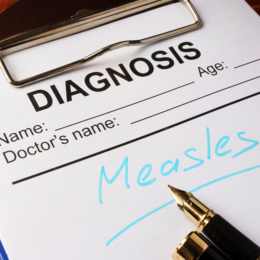 Last month, researchers with Stanford and Baylor Universities answered “what could go wrong?” if parents in the U.S. broadly gave in to the anti-science rhetoric of the anti-vaccination movement.

The researchers used data on real measles outbreaks monitored by the U.S. Centers for Disease Control and Prevention to create a mathematical model predicting how many children would contract measles if fewer and fewer parents choose to vaccinate their children. The authors estimate that even a 5 percent decline in the number of measles, mumps, and rubella (MMR) shots issued could result in three times as many measles cases every year.

Those in search of a worst-case scenario need look no further than this year’s measles outbreak in Minnesota. 79 individuals contracted measles when vaccination rates in one community plummeted to 42 percent. Unsurprisingly, the community’s outbreak followed repeated visits from the anti-vaccine movement’s most well-known activist, Andrew Wakefield.

Unfounded fears over autism were entirely to blame for the Minnesota outbreak, despite the failure of even those studies funded by anti-vaccine advocates to establish any link between childhood vaccines and autism. But for organizations and public speakers who have built their salaries around perpetuating misinformation, facts have little pull.

Unfortunately, the damage of Wakefield’s widely discredited, and ultimately retracted study tying vaccines to autism continues to damage public understanding and reduce vaccination rates so that measles is once again rearing its head.

Although California stopped letting parents of public school students cite “personal beliefs” as a reason to skip mandatory vaccinations after the state sparked a very public, very expensive measles outbreak in 2015, kindergarten vaccination rates are still low in charter and private schools. In five dozen California schools, fewer than half the students are fully immunized.

The situation wasn’t always as dire. Less than 40 years after measles vaccinations became a routine part of the childhood immunization schedule, the U.S. declared that the virus had been eliminated in the country. New cases would only occur from overseas travel.

The next time you wonder what harm can possibly come from heeding the advice of “well meaning” health activists with a penchant for ignoring science, take a look at The College of Physicians of Philadelphia’s history of measles.